The first round of the Eastern Conference was expected to be a snoozer, and outside of Joel Embiid’s balky knees and some Ben Simmons-Jared Dudley fireworks, it was. It featured two sweeps and a pair of five-game series that would have been sweeps if not for a pair of fluky Game 1 performances.

The good news for NBA betting fans is the second round is going to be a gauntlet. The conference has been a four-team race all season – especially after Victor Oladipo’s season-ending injury in Indiana – and now we get a final four that features three very evenly-matched teams all looking to upset Giannis Antetokounmpo and the Bucks.

These four teams feature seven of the conference’s 12 All-Stars (Antetokounmpo, Middleton, Embiid, Simmons, Leonard, Lowry, Irving). It’s got the likely league MVP, a Finals MVP in Leonard and Irving, who knows a thing or two about postseason heroics.

Odds to Win the East It’s a rematch of what was arguably the best first-round playoff series from a year ago. These two teams squared off in the 2 vs. 7 matchup, and the home team won all seven games, with Boston dominating in a Game 7 to advance to the second round. This time around, it’s the Bucks who have home-court advantage.

These two teams played pretty evenly in the regular season. Boston took the first game, snapping the Bucks’ streak of seven straight wins to begin the season but Milwaukee responded by taking the final two games of the season series with a 13-point road win and a one-point home win in the first game out of the All-Star break.

As we’ll get to, the series might be more evenly matched than oddsmakers have it. Boston is oozing with critical playoff experience and has that mental edge from last year’s playoff matchup. Then again, having Giannis Antetokounmpo on your team is about as big an edge as there is in basketball these days.

There comes a time in the playoffs when a team is playing so well that it doesn’t matter how well their opponent plays. The Bucks may be on the brink of that status. They finished the regular season 10-5 but rested many of their big guns down the stretch; of that 15-game stretch, they were 9-1 in games that Antetokounmpo played.

The good news? Giannis is healthy and rolling. His playoff career-best 41 points in Game 4 finished off an easy sweep of the Pistons in which the Bucks outscored Detroit by 95 points.

Yes, it was the NBA’s top seed against a reeling 8 seed, but it was a dominant four-game performance by Milwaukee that puts them in excellent position moving forward. Oddsmakers continue to shrink their title odds seemingly by the game, lending credence to the belief that there’s no team in the East that can slow them down.

Antetokounmpo averaged 31.0 points on 59 percent shooting in three games against Boston, and his supporting cast in Khris Middleton, Eric Bledsoe and Brook Lopez all looked fantastic against Detroit. They may even get back Malcom Brogdon from his foot injury. This team doesn’t have any weaknesses.

Celtics Heating Up At Perfect Time

But maybe those close matchups will serve them well in a series that could feature close games down the stretch. In “clutch time” against the Pacers, the Celtics had an absurd 74.4 net rating in 8 minutes and outscored the Pacers, 25-9.

Brad Stevens seems to have found some combinations that work, including getting great bench minutes from Gordon Hayward and an efficient Jaylen Brown.

Combine that with Kyrie Irving’s hot postseason (22.5 points on 42 percent from deep) and Jayson Tatum (19.3 points on 51 percent shooting) and you’ve got a balanced attack to match Milwaukee’s incredible depth.

Lest we forget that Boston, at the outset of the season, was the favorite in the East. They’ve got star power, young talent with playoff experience and one of the best head coaches in the game.

One player they’ll miss dearly is Marcus Smart, who is expected to miss a second straight series with an oblique injury. He would have come in handy against the Bucks’ high-octane offense, so Brad Stevens will have to rely more heavily on Brown, Terry Rozier and even Marcus Morris to try and slow down an offense that’s showing no signs of doing so.

They’re an incredibly tough out at home, having won 14 of their last 15 postseason games in TD Garden. The lone loss was Game 7 of last year’s Eastern Conference Finals against LeBron and the Cavs, and four of those 14 wins came against the Bucks last season.

SERIES PICK: Bet the Milwaukee Bucks to win the series at -375 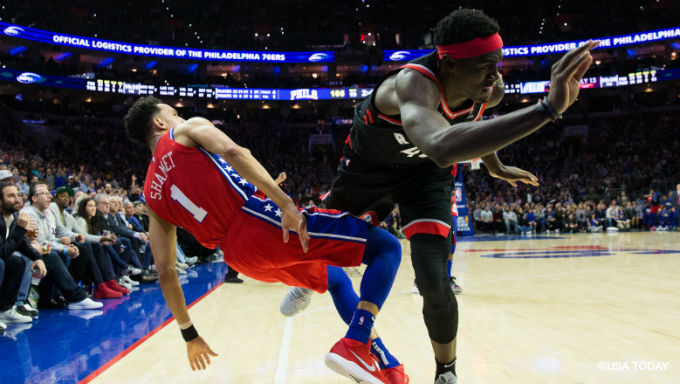 No two teams were more aggressive both in the offseason and at the trade deadline than the Raptors and 76ers.

Eyeing their respective championship windows opening with LeBron James’ decision to sign with the Lakers, the Raptors traded for Kawhi Leonard over the summer and added four-time All-Star Marc Gasol mid-season. The Sixers, meanwhile, wasted no time in putting together a contender by trading for Jimmy Butler in December and adding Tobias Harris at the trade deadline.

The result was two teams with incredible frontline talent that will pit seven different former and current All-Stars against one another. That list doesn’t even include Harris, J.J. Redick or Pascal Siakam. Simply put, this series is loaded.

It’s difficult to analyze regular-season matchups between these two teams because of how much the roster has changed between the start of the season and now.

Still, the Raptors smacked the 76ers at home in November (pre-Butler) and December (post-Butler) and again on the road in February (pre-Harris), while the Sixers thumped a Kawhi Leonard-less Raptors team in late December. There’s not much to garner from those results.

Make all the Raptors playoffs jokes you’d like, but this is still an outstanding team. They’ve bowed out of the postseason at the hands of LeBron James each of the last three seasons but clearly see an opening with James at home this spring. They won perhaps the quietest 58 games in NBA history, and did so with Leonard resting 22 times.

That load management for Leonard was all part of the plan to have him fully rested for the postseason. Leonard made his coaching staff look pretty smart in Round 1 as he toyed with the Magic’s top-10 defense, averaging 27.8 points on 55.6 percent shooting.

He looked every bit the part of the 2014 Finals MVP and is rounding into form at the perfect time. He looks to be the kind of playoff performer that DeMar DeRozan, the player he was traded for in July, couldn’t be.

Leonard was outstanding but was almost overshadowed by Siakam. The frontrunner for Most Improved Player was just as good, averaging 22.6 points and 8.4 rebounds in the easy five-game series. Kyle Lowry even showed that perhaps he’s over the playoff woes that have plagued him his entire career. The 33-year-old point guard averaged 14.3 points and 51 percent after going 0-for-7 in Game 1.

They’ll face a stiffer test in the second round but should find more offensive success. The Raptors averaged 115.5 points against the Sixers, nearly 12 points more than the 103.7 they averaged in their other games.

Slowing down Joel Embiid will be critical, and that’s part of the reason they dealt for Gasol at the deadline. After that, it’s about the three-headed monster of Lowry, Leonard and Siakam showing up.

Will Joel Embiid’s Knee Hold Up?

There are two scenarios in play for the Sixers in the second round:

It’ll be something to watch the entire series, which has the feel of one that will go back and forth and potentially to seven games.

The Sixers were able to cruise past a Nets team – after a perplexing Game 1 performance – thanks to Ben Simmons, Tobias Harris and Jimmy Butler, who combined to average 51 efficient points in Philly’s final four victories. But the road gets much tougher, and waiting for them is Toronto’s fifth-ranked defense that was third best over the last five weeks of the season.

There’s hope, though. Simmons has taken has game to another level and the Raptors don’t have a true answer for him. He averaged 16.3 points on 63 percent shooting, 9.3 rebounds and 8.8 assists in the four matchups.

Butler will have to play better offensively, but his main assignment will be slowing down Kawhi Leonard. That’s exactly why first-year GM Elton Brand traded for him at the deadline: To slow down the game’s best wings when the games mattered most.

In the end it’ll come down to Embiid’s health. Philadelphia is the rightful underdog, meaning their best players will have to outshine Toronto’s. That’s the big man in the middle. He averaged 26.3 points and 11.8 rebounds in four games against Toronto in the regular season and he’ll need every one of those for the Sixers to have a chance.